Read the latest MASSCAP news including network and agency news, policy and program updates, and opinion and advocacy pieces.

A program in Massachusetts aims to provide training on trauma-informed care for early educators.

A new report shows financial supports made available in the pandemic have led to a direct reduction in poverty in Massachusetts.

Financial assistance during the pandemic such as expanded unemployment benefits, expansion and extension of the child tax credit, and additional SNAP benefits all contributed to direct reductions in poverty and racial disparities.

Today the Massachusetts Association for Community Action (MASSCAP) along with Berkshire Community Action Council were joined by Congressman Richard Neal, Senator Adam Hinds, and Representative John Barrett III among others in kicking off this year’s tax season by launching the annual Volunteer Income Tax Assistance program (VITA) as well as recognizing the importance of accessing the Earned Income Tax Credit (EITC).

As cold weather moves in, agencies are working to make sure Massachusetts residents know how to apply for fuel assistance and weatherization, if they think they might struggle with their heating bills this winter.

A Focus on the Home Energy Assistance Program

With the school year in full swing for Massachusetts K-through-12 students, many parents are seeking early-childhood education and care for their younger kids.

Community Action Agencies applauded the Massachusetts General Court for its commitments to anti-poverty efforts in the 2022 state budget, and urged Gov.

Community Action Agencies say $5 million in the House version of the Massachusetts state budget next year would go a long way toward helping the most vulnerable communities recover from the pandemic.

Today the Massachusetts Association for Community Action (MASSCAP) along with the 23 Community Action Agencies in the state were joined by Congressman Richard Neal, and Senator Jo Comerford, Representative Natalie Blais among others in kicking off this year’s tax season by launching the annual Volunteer Income Tax Assistance program (VITA) as well as recognizing the importance of accessing the Earned Income Tax Credit (EITC).

A Focus on Fuel Assistance and Weatherization

MASSCAP, along with Action Inc., the network of Community Action Agencies in Massachusetts and the Massachusetts Energy Directors Association (MEDA), will launch its annual statewide awareness campaign to ensure that vulnerable Massachusetts families are able to keep safe, warm and healthy this winter. 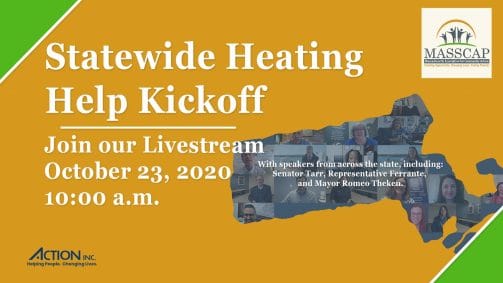 Preparing and filing tax returns bring everyone stress annually, especially those living with low incomes, and especially during a time of crisis when it is harder to access services.

Community Action has always stood for and advanced the promise of equal opportunity for all.   The horrific death of George Floyd this past week brings into sharp focus how far we have to go as a society to address the social and economic inequality that persist as historic impediments to the kind of fair, open, just, and inclusive country that fosters belonging not exclusion, that we aspire to be.

The pandemic is affecting our lives in profound and unexpected ways.

Check out our NEW video series: Service & Recovery in the time of COVID-19

The pandemic is affecting our lives in profound and unexpected ways.

Thousands of Households To Be Helped Immediately

On behalf of thousands of vulnerable households struggling with their energy burden across the Commonwealth, we thank Chairman Michlewitz and the House Ways and Means Committee for drafting a supplemental budget that includes $15M for Fuel Assistance.

In response to a second consecutive reduction in federal fuel assistance resources legislators in the Senate led by Senators Hinds and Tarr, and in the House, led by Representatives Mark and Wong, joined last week by more than half of their colleagues, urged budget writers in both chambers to include $15 million for fuel assistance in the FY20 Supplemental Budget.

A Partnership with The Health Foundation of Central Massachusetts

During MASSCAP’s annual public policy briefing earlier this week at the State House, READYGO, a new early education and care workforce development initiative made possible through The Health Foundation of Central Massachusetts (THFCM), was announced.

Thousands of Massachusetts families risk running out of heating oil this winter without additional assistance from the state, an advocate warned Wednesday as lawmakers began pushing for new funding to augment federal aid.

Today the Massachusetts Association for Community Action (MASSCAP) along with the Cambridge Economic Opportunity Committee (CEOC) and the Community Action Agency of Somerville (CAAS) were joined by Senator Sal DiDomenico, Representative Marjorie Decker, Cambridge Mayor Sumbul Siddiqui, Somerville Mayor Joseph Curtatone, and the Deputy Treasurer Alayna Van Tassel among others in kicking off this year’s tax season by launching the annual Volunteer Income Tax Assistance program (VITA) and celebrating 50 years of this critical program as well as recognizing the importance of accessing the Earned Income Tax Credit (EITC).

A Focus on Fuel Assistance and Weatherization

MASSCAP, along with LEO Inc., the network of Community Action Agencies in Massachusetts and the Massachusetts Energy Directors Association (MEDA), will launch its annual statewide awareness campaign to ensure that vulnerable Massachusetts families are able to keep safe, warm and healthy this winter.

Effective programs that help families to make ends meet, like the Earned Income Tax Credit, SNAP, fuel assistance, school lunches, Head Start, and Social Security cut the number of people in Massachusetts living in poverty by almost half and reduce the number of children living in poverty by more than half, according to a new report on poverty called “Obstacles on the Road to Opportunity: Finding a Way Forward Together.” The report was commissioned by the Massachusetts Association for Community Action (MASSCAP) and written by Nancy Wagman, Kids Count Director of the Massachusetts Budget and Policy Center (MassBudget).

MASSCAP Calls for Its Reversal

Is it possible to succeed as a legal immigrant if you are faced with a regulation designed to cause you to fail?

One Holyoke family is now finally able to make the down payment on their first home. This family with 2 young children and 2 working parents who have been saving for some time left the Valley Opportunity Council (VOC) Volunteer Income Tax Assistance (VITA) site smiling.

We very much appreciate and are grateful to our elected officials – our legislators and the governor – for being so responsive and sensitive to the needs of our vulnerable friends and neighbors living with low-incomes and struggling with high energy burdens which are a drain on their limited resources and threaten their health and safety.

BOSTON – Families living on tight budgets are facing another tough week with brutal wind chills and snow in the forecast.

Community action groups often associated with getting heating assistance to people who need it want the Legislature to give them a broader mission that reflects their efforts in areas like food assistance and financial literacy.